The dropping point of a lubricating grease is the temperature at which a solid grease, transitions into a liquid phase.  In practical applications, such as in a bearing operating at high temperatures, reaching the dropping point may mean the possibility of the grease leaking out of the bearing, assuming that the bearing is not sealed.

The dropping point, normally in excess of 200°C, in an indicator of a grease’s upper-temperature limit, but not necessarily the maximum temperature at which the grease may be used without sacrifice in performance.

To determine a grease’s dropping point, a test is conducted according to ASTM D-566 or D2265.  A sliver of grease is placed inside a nipple with a small orifice at the bottom, and the nipple is immersed in an oil bath that is heated.   A thermometer is also immersed in the oil bath.  At first, no grease will exit the nipple orifice, though a trail of grease will seep out as soon as dropping point is reached. 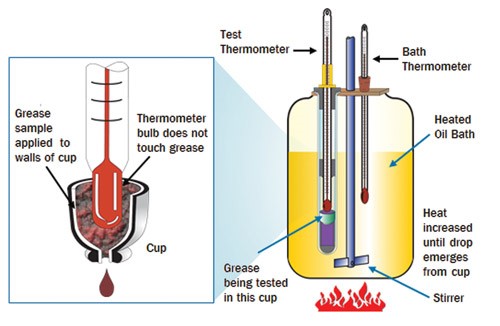