Every six (6) to twelve (12) months, or whenever the water-soluble coolant in the CNC machine sump exhibits bad odors, or when the metalworking fluid is not performing according to standards already, a sump cleanout is normally performed.  The un-informed machine operator may just simply remove the used fluid and charge the machine with freshly mixed coolant.   This is counter-productive, as the fresh fluid will almost certainly get immediately contaminated by bacteria or fungi, as well as other residues from the system. 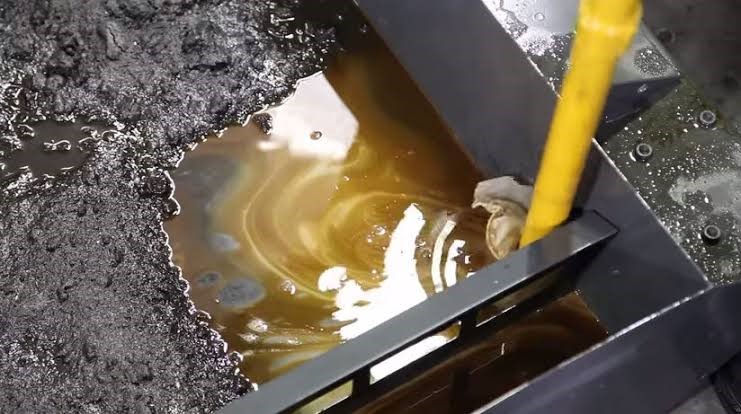 A flushing procedure is best performed after removing the used coolant, and prior to a fresh charge.  Flushing in the right manner kills all harmful biological organisms, and cleanses out all metal sludges, slimes, and oils trapped in machine sump, as well as its walls and pipings.

If available, a slightly alkaline detergent, used at 1-2% with water, should be filled to the empty, dirty sump, and circulated for two (2) to three (3) hours.   The detergent solution acts to soften trapped soils, and eradicate any bacteria and fungi.  During circulation, it is advised that the same flushing solution is used by the machine operator to hose down the insides of the machining area.  In the absence of a detergent, the metal-working fluid itself, used at 1-2% is an apt alternative.   For very contaminated systems, one may add to the solution, 0.01-0.02% of biocide for reinforcement.

Remove the flushing fluid after 2-3 hours, ensuring that all floating soils are removed, too.  At this point, one is now ready to charge using a fresh-mix of water-soluble coolant, whose sump life and performance can be maximized. 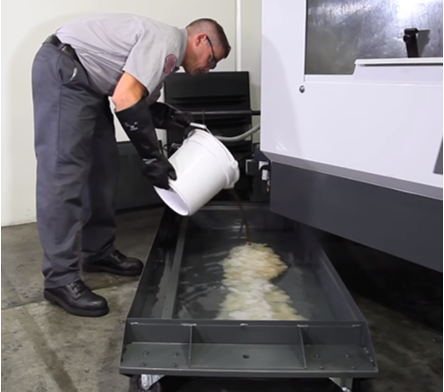 As mentioned in a prior chapter, it is appropriate to pre-mix water and the coolant concentrate in a separate container first, prior to filling the CNC sump.